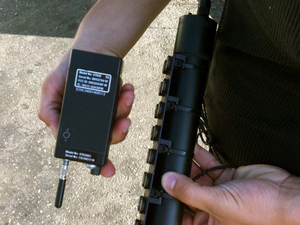 EnlargeYasir Afifi/APThe Supreme Court considers whether GPS monitoring devices like this one may be affixed to suspects’ cars without a warrant from a judge. 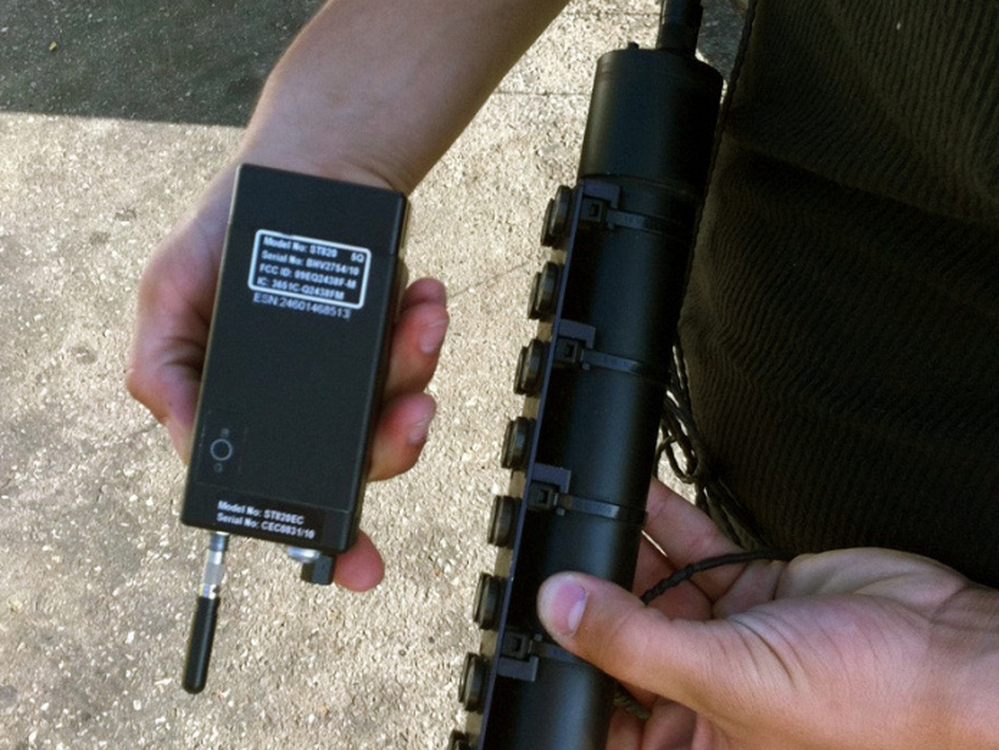 Yasir Afifi/APThe Supreme Court considers whether GPS monitoring devices like this one may be affixed to suspects’ cars without a warrant from a judge.
text size                           AAA

The U.S. Supreme Court, an  institution steeped in tradition, steps  into the turbulent world of new  technology Tuesday. At issue  before the court is whether police must get a warrant from a judge before they  can attach a GPS tracking device to a car so they can  monitor a suspect’s every movement for an indefinite  period of time.

The case could have enormous implications  for privacy rights in the information age.

Police, quite naturally, want to use new  technology to get the goods on the bad guys, and citizens, quite naturally,  think that when they leave their homes, they still have some zone of personal  privacy in their cars. This case presents that clash in vivid terms.

In 2004, a joint FBI-Washington, D.C.,  Metropolitan Police task force began investigating suspected drug kingpin  Antoine Jones. First they got a warrant and  wiretapped him, but Jones was careful about how he spoke  on the phone. So then they put a GPS tracking device on his car, and for 28  days, every time that car moved, its location was tracked by satellite, with the  information sent every 10 seconds to the FBI. The tracking led to Jones’  arrest, plus the seizure of 97 kilos of cocaine and $850,000 at  a stash house. Jones was convicted of  conspiracy to distribute drugs, but a panel of conservative and liberal judges on   the U.S. Court of Appeals in Washington unanimously threw out the  conviction because the tracking device had been attached without a warrant. The  court said that tracking a car for such a long period without court  authorization violates the Fourth Amendment’s ban on unreasonable searches.

The government appealed to the  U.S.  Supreme Court,  contending that no warrant is required when a car is on public roads. And the  Supreme Court hears arguments Tuesday in the case.

“It’s critical to understand that this  case is not about whether law enforcement can use GPS devices.  It’s about whether they should get a  warrant,” says lawyer Walter Dellinger, who  represents Antoine Jones.

If the Supreme Court gave a green light [to warrantless GPS tracking, then] any officer can install any GPS device for any reason on anybody’s car, even if the officer thinks it would be interesting to know where Supreme Court justices go at night when they leave the courthouse. No one would be immune from having a GPS device installed on their vehicles.

“If the Supreme Court gave a green light” to warrantless GPS  tracking, he adds,   then “any officer  can install any GPS device for any reason on anybody’s car, even if the officer  thinks it would be interesting to know where Supreme Court justices go at night  when they leave the courthouse. No one would be immune from having a GPS device  installed on their vehicles.”

The government, however, contends that the  Fourth Amendment only   bans warrantless  searches of private spaces, like the home, or the interior of a car, or a locked  office desk.  And  the  Supreme Court has  previously held that searches on public streets — of trash put out for  pickup, for instance — do not require a warrant. In addition, the government asserts  that   the   GPS  device  is just an electronic extension of old-fashioned human  surveillance.

Rowan concedes that everyone has what he  calls “an instinctive reaction”  that warrantless GPS tracking goes too far.   But, he adds, “you are talking about a very clear line that the Supreme  Court has laid down over a very long time, that what the police can observe in  public, the individual doesn’t have a reasonable expectation of privacy in.  And  this is the functional equivalent of having the police do a very effective  covert surveillance of an individual over a long period of time.”

Rowan does say as a practical  matter that it would  be next to impossible to conduct surveillance for a month without being  detected. That’s why  the  GPS is a game  changer and, as Rowan puts it, a “terrific boon” for police.

So why not get a warrant first? Because to  get a warrant, police have to show they have probable cause to believe a crime  is occurring or has occurred. And the government says GPS tracking is  particularly useful at the early stages of an investigation — before probable cause can be established.

“You have a lead against a person, but it’s  not corroborated,” says Rowan. “You don’t know what they’re up to. This is a low-cost device that would allow the FBI or any law enforcement agency to gather a  great deal of information about their movements without having to go to a judge  and justify their investigation.”

“The government’s position is that any law  enforcement officer, in his completely unfettered discretion, can choose to put  this device on anyone’s car and track what medical appointments you go to, what  religious groups you meet with, what political activities you drive to. This is  really an extraordinary undertaking and one where the critical protection would  be that a neutral magistrate would approve in advance whether there is actually  some probable cause to believe someone has committed a crime before you install  a GPS device,” he says.

Dellinger has a second argument, not  addressed by the appeals court, but that is before the Supreme Court.  The  Fourth Amendment to the Constitution bans not only unreasonable searches, but  also  seizures of a property. He argues that placing the GPS device on the  exterior of Jones’ car interfered with Jones’ right to exclude others  from using his car, and  that planting the device constituted a trespass on Jones’  property.

More On The Supreme Court

That argument  does appeal  to former Assistant Attorney General  Rowan, who opines that “it just doesn’t sound right” that  there is no expectation of privacy  when a device is covertly affixed to a car.

Indeed, an unscientific sampling of  prosecutors shows a real hesitation about how far to push the envelope with GPS  devices.

David Kelley, the former U.S. attorney in New York, who spent  nearly 20 years as a federal prosecutor, says he always assumed that a  warrant was needed for a long-term tracking device. “The four corners of the car  is yours,” he contends. “And you have a reasonable expectation of privacy in  that.”

Kelley concedes that requiring a warrant  will mean some bad guys get away.  “Tough luck,” he says.  “Go find another way to get the guy. And if  you can’t get probable cause, you know  what?  Maybe you have no business getting into  that car to put in that device.”

While today’s case involves GPS devices,  it could have enormous repercussions for other devices in the information age.  What about cameras that photograph people on public streets? What about cellphones that can be tracked whenever they are on?

Defense attorney Dellinger maintains those are different: The cameras are stationary, and the cellphones can be turned off.

The Supreme Court is usually reluctant to  rule boldly on matters of new technology.  It has learned, the hard way, that  the reach of new technology is hard to predict. In the 1920s, when law  enforcement began wiretapping suspects, the court ruled that no warrant was  required.

Nearly four decades later, in  1967,   the court overruled  that decision and said a warrant is required.

The court’s only ruling on any sort  of a  car tracking device was in 1983. In that case, the court approved the placement, without a  warrant, of a beeper  in a large container that suspects put in their car.  Police then followed the sound of the beeper for a single day. The court,  however, specifically left open the question of whether any longer-term tracking device would require a  warrant.

In recent years, the lower courts have split on the  question.

In Washington, D.C., Judge Douglas Ginsburg, writing for a  unanimous appeals court   panel, said a  warrant was required in the Jones case because of its intrusiveness. “A person  who knows all of another’s travels can deduce whether he is a weekly churchgoer,  a heavy drinker, a regular at the gym, an unfaithful husband, an outpatient  receiving medical treatment, an associate of particular individuals or political  groups.”

The likelihood that police could conduct  such a monthlong, 24/7 surveillance by just watching and following the suspect,  he said, is “nil.”

When the full nine-member appeals court  declined to review the panel’s decision, Chief Judge David Sentelle dissented.  “A person’s reasonable expectation of privacy while traveling on public highways  is zero,” he said, and “the sum of an infinite number of zero-value parts is  zero.”

That dissenting view prevailed on the  opposite coast when the Ninth Circuit Court of Appeals, based in San Francisco,  ruled that no warrant is required in GPS  cases. When the  court declined to reconsider its ruling,   Chief Judge Alex Kozinski,  a native of communist Romania who immigrated to the  United  States with his parents in 1962 when he was 12, dissented.    “There is something  creepy and un-American about such clandestine and underhanded behavior,” he  wrote of the warrantless placing of GPS tracking devices. “To those of us who  have lived under a totalitarian regime, there is an eerie feeling of deja  vu.”