Among the demonstrators was an employee at a local marijuana collective. “I’ve worked there for years,” the man, who asked to remain anonymous, told The Huffington Post. “But if the Feds close us down, I’ll be out there on the street with the Occupy Wall Street protesters because I’ll be out of a job. This is my career, my livelihood. What Obama has done to our industry is nothing short of entrapment.”

Despite an earlier promise to leave medical marijuana laws to the states, federal officials recently launched a whirlwind crackdown on cannabis dispensaries throughout the state, threatening to shut down certain pot shops and targeting others with exorbitant IRS bills and other sanctions. At a press conference held prior to the demonstration, Assemblyman Tom Ammiano (D-San Francisco) joined advocates, local lawmakers and business owners in calling on the Obama administration to intervene.

San Francisco resident Misha Breyburg, who participated in the protest, said he was disappointed in Obama’s regression from his campaign promises. “It’s important for politicians to stand by their words,” he said. “These people out here — they’ve worked hard, they’ve saved their money and they’ve taken all of the legal steps — and then to have their property taken away from them? Maybe in North Korea.”

California voters approved the use of medical marijuana in 1996 with the passage of Proposition 215, later named the Compassionate Use Act, which allows patients to possess and cultivate cannabis with a doctor’s permission. The law has been interpreted many times since its inception. In City of Garden Grove v. Superior Court in 2007, trial court sided with the patient, finding it “is not the job of local police to enforce the federal drug law.” A California Supreme Court ruling in 2010 found residents may grow or possess “reasonable amounts” of marijuana with a doctor’s blessing.

As a candidate, Obama promised to maintain a hands-off approach toward pot clinics adhering to state law, telling a 2007 town hall in Nashua, N.H., that a Justice Department prosecuting medical marijuana users was “not a good use of our resources.” Now Ammiano, a self-described Obama supporter, is asking the president to “exercise some leadership on this issue.”

“We have it on tape,” Ammiano said of Obama’s promise. “Eric Holder early in the campaign said that the Attorney General would not raid medical marijuana dispensaries — there are around 16 states that have them — then out of the blue comes this droid missile aimed at medical marijuana and the dispensaries, and there’s a lot of untruth…to me this is kind of a ‘Reefer Madness’ mindset.”

The crackdown comes even as 50 percent of Americans favor legalizing marijuana, according to a recently released Gallup poll, up from just 36 percent in 2006.

Authorities estimated nearly 1,000 protesters descended on the W Hotel during the duration of Obama’s appearance. In addition to the marijuana enthusiasts, the president was greeted by environmentalists, anti-war activists and a smattering of Occupy Wall Streeters. The most vocal demonstrators opposed the construction of the Keystone pipeline in the Midwest.

Rally signs ran the gamut, from “Yes We Cannabis” and “Obama Changed,” to “No Pipeline For The One Percent” and “Bring Our Troops Home.” Another group set up a loudspeaker and played clips of promises made during Obama’s 2008 campaign speeches that have not yet been met.

The president stopped by San Francisco as part of a West Coast tour promoting his economic and jobs plans as well as his 2012 campaign. Take a look at images and video from the demonstrations below: 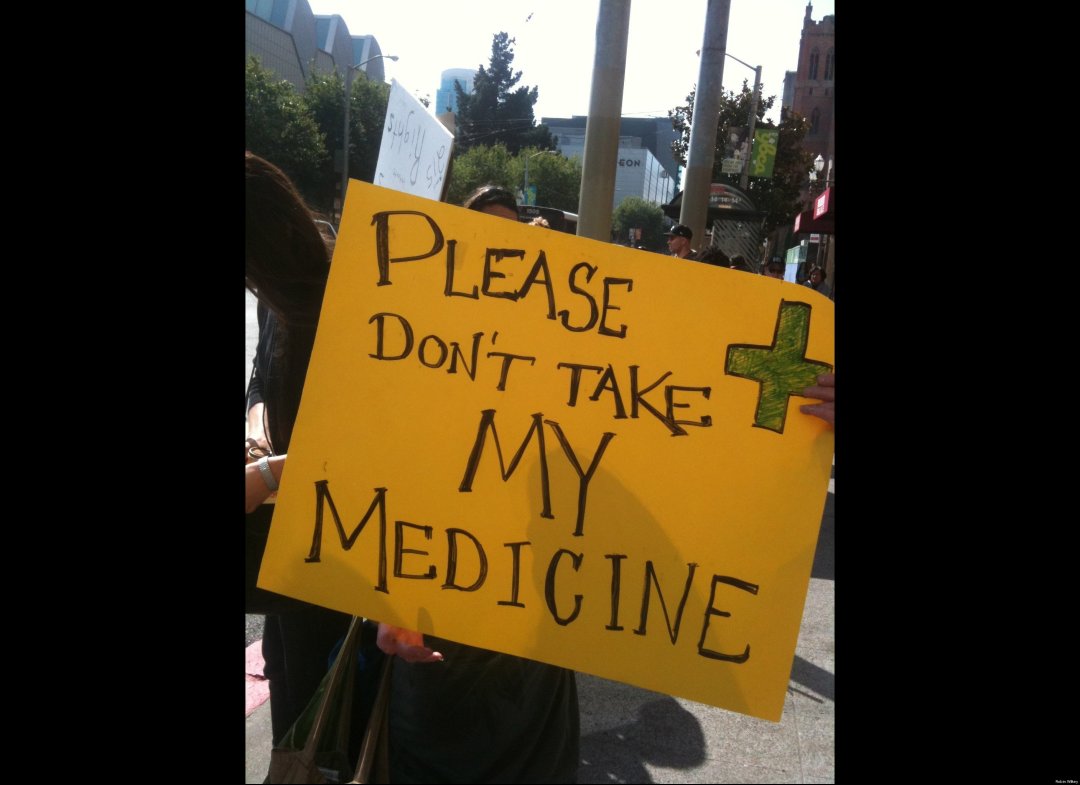 It’s not necessary for you to have to go to the jail to find a bail bonds... Buena Park CA Police: Four arrested in Halloween night rapes
Scroll to top