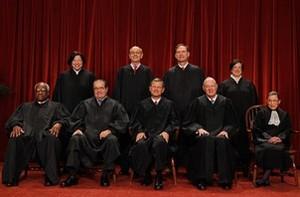 The Supreme Court justices were decked out in their usual black robes today
for a case involving the question of whether police need to get a warrant in
order to attach a GPS tracker to someone’s car. But given their paranoia about
possible technology-enabled government intrusions on privacy, it might not have
been surprising if they had also been wearing tin foil hats.

The case at hand was U.S.
vs Jones, involving Antoine Jones, a D.C. nightclub owner, who was busted
for running a massive cocaine ring after police placed a GPS tracker on his Jeep
Cherokee that tracked his movements for a month and showed him regularly driving
to a stash house in Maryland. The police got a warrant to do this, but put a
tracker on Mr. Jones’s Jeep the day after the warrant expired (and while it was
in a parking lot in Maryland, rather than in D.C. where the warrant was issued)
— D’oh. The government argued that the tracker only followed Jones’s movements
on public streets where he could otherwise be readily observed, so said it
didn’t violate his privacy (and thus argued that the government doesn’t
ever need a warrant to track people this way). Jones’s side argued that
tracking someone’s every move for 24 hours a day, 7 days a week for four weeks
becomes an unreasonable search and a violation of privacy because of the
pervasiveness of the tracking. Jones’s lawyer was also quite hung up on the idea
that the government shouldn’t have the right to stick stuff on your property,
and thus trespass against you.

Last year, the Supreme Court made
a very narrow ruling in a case involving technology and privacy, deciding
that a California SWAT officer was not entitled to privacy when it came to
steamy text messages he sent on a work-owned (and thus government-owned) pager.
They avoided making any larger pronouncements about whether employees generally
have any kind of privacy when it comes to what they do on work-owned computers
and smartphones. I assumed that the Justices might be similarly reserved in
making big pronouncements about privacy and technology in this case, but I was
wrong. The Justices came out swinging with big theoretical questions about the
potential for vast government surveillance using smartphones and tracking
technologies that are getting cheaper and cheaper; the Justices were ready for a
big privacy rumble.

The last case to deal with electronic surveillance
of people’s movements was 1983′s U.S. vs Knotts,
in which the Court said it was okay for the po-po to put a beeper in a can of
chloroform, get someone to put it in Knotts’s car, and then use the beeper to
track the car from a short distance. (This made it harder for a suspect to lose
his tail by driving down an alley or making a sharp U-turn; the beeper beeped
slower when the car was far away and faster when it was close.) Deputy Solicitor
General Michael Dreeben tried to argue that the current case is basically the
same thing, but Chief Justice John Roberts smacked that argument down, saying
the beeper still involved a lot of work for police to tail a suspect, and even
involved someone in a helicopter tracking the car. “That was 30 years ago. You
get a lot more information from the device now,” said Roberts. “Now, law
enforcement just sit back while a device is collecting tons of information.”

Justice Anthony Scalia, meanwhile, who is known as
a privacy skeptic, focused on the “trespass” (pronounced “tress-pess” at One
First Street) involved in the cops actually going up to a car and attaching a
device to it. He argued it was okay, though “sneaky,” for cops to get someone to
put a beeper in Knotts’s car surreptitiously, but that by doing this themselves
in the Jones case, that they had violated the Fourth Amendment protection of his
“house, papers and effects.” Sticking to that line of reasoning would likely not
be very reassuring to those people who are worried about the applicability of
this case to tracking people using the GPS device we all hold near and dear to
our hearts, literally: our cell phones.

Justice Anthony Kennedy started pushing in that direction, asking Dreeben
whether it would be okay for the Gov to put a tracking device on someone’s coat
to follow their movements. Dreeben demured at that, saying that would track
someone in a private residence, not just their public movements on a road, so
that would be a violation of privacy.

Chief Justice Roberts then posed a hypothetical: “Would it be okay for the
government to put GPS trackers on the cars of all of us without a warrant, and
track our movements?” he asked, gesturing at his fellow justices. The
government’s attorney replied that it would be, since their movements would only
be tracked on public streets. They looked understandably put off by this line of
reasoning. Note to self: Telling the Justices that it’s totally legal to
stalk them may not be the best argument to make your case.

“If you win this case, there is nothing to prevent the police or government
from monitoring 24 hours a day the public movement of every citizen of the
United States,” said Justice Stephen Breyer. “If you win, you suddenly produce
what sounds like 1984.”

Dreeben argued that the government isn’t doing this universally (and doesn’t
plan to ). In response to a question from Justice Elena Kagan, he said the
federal use of GPS trackers annually numbers in the low thousands (but said he
didn’t know how often the devices are used by state law enforcement).

Justice Sonia Sotomayor was the most adamant in asking about the larger
repercussions of how the government is interpreting what constitutes a
“reasonable search” using tracking devices. “By your theory, you could track
everyone using their cell phones. Your theory is that as long as you’re
monitoring someone in public, it’s reasonable for you to use their possessions
to track them,” she said.

When Jones’s lawyer came up to argue, it was a little like watching 9 cats
play with an injured mouse that they felt pity for. A criminal defense attorney
who has never argued before the Supreme Court before, Stephen Leckar focused
solely on the unreasonableness of the police putting a tracking device on his
client’s property without a warrant and refused to indulge the Supreme Court’s
questions about the pervasiveness of the monitoring itself. When one justice
asked whether this would have been a reasonable act by police if they put the
tracker on the license plate of the car (which is owned by the State) rather
than the underbelly of the Jeep, Leckar actually said yes. Justice Scalia jumped
in to help him out, saying that a driver gives the government the right to put a
license plate on a car, not a tracking device on their car.

Justice Kennedy asked whether it would be acceptable if the DC police had
tracked Jones for a month with a team of agents following him rather than doing
it with a tracking device. “We’re not asking for the police to be less
effective,” he replied. “But GPS trackers greatly expand what they can do.”

The Justices asked how this was different from London where ubiquitous
cameras throughout allow police to track people’s journeys throughout the city.
Justice Sotomayor talked about the possibility of the government using cameras
in satellites. “I don’t think it’s too far in the future when police can look
down from satellite cameras and track people from place to place,” she said. The
Justices seemed eager to tackle the question of rampant government surveillance
aided by new technological tools, but Leckar’s insistence on sticking to the
idea of tracking with a device attached to a car limited the scope of the
discussion (which surely left many a privacy wonk in the audience
disappointed).

The government’s attorney tried to narrow the Justices’ focus to their
particular case. “Don’t use this case to prevent 1984 from coming to pass,” he
said. He suggested that the extent to which the government should be allowed to
surveil people without a warrant is something that Congress should weigh in on.
Justice Scalia, for one, was receptive to that argument saying it wasn’t for the
Court to set limits on what length of time is okay to monitor someone, i.e.
whether it’s okay to put a GPS tracker on someone’s car for one trip or for one
day but not for 30 days. If the Court goes that way in its opinion in this case,
which will come down later this term, we may end up with yet
another opinion from the Supreme Court pleading with Congress to update
privacy laws for the modern age.

*Transcript from the Supreme Court can be found here
[pdf].

Do Police Need Warrants For GPS Tracking Devices? Marijuana laws taking a hit in some quarters
Scroll to top