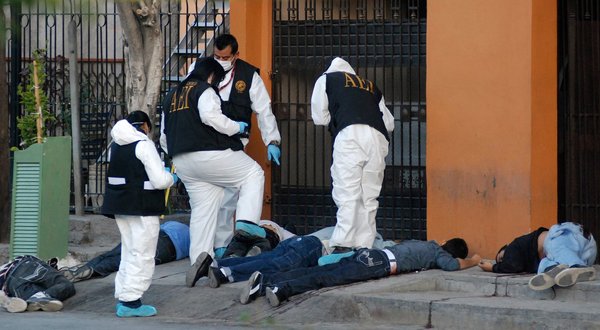 A crime scene in Monterrey, Mexico, last week. Drug-related violence has claimed the lives of more than 40,000 people since late 2006, Mexican officials say.

WASHINGTON — Undercover American narcotics agents have laundered or smuggled millions of dollars in drug proceeds as part of Washington’s expanding role in Mexico’s fight against drug cartels, according to current and former federal law enforcement officials.

The Reach of Mexico’s Drug Cartels

The agents, primarily with the Drug Enforcement Administration, have handled shipments of hundreds of thousands of dollars in illegal cash across borders, those officials said, to identify how criminal organizations move their money, where they keep their assets and, most important, who their leaders are.

They said agents had deposited the drug proceeds in accounts designated by traffickers, or in shell accounts set up by agents.

The officials said that while the D.E.A. conducted such operations in other countries, it began doing so in Mexico only in the past few years. The high-risk activities raise delicate questions about the agency’s effectiveness in bringing down drug kingpins, underscore diplomatic concerns about Mexican sovereignty, and blur the line between surveillance and facilitating crime. As it launders drug money, the agency often allows cartels to continue their operations over months or even years before making seizures or arrests.

Agency officials declined to publicly discuss details of their work, citing concerns about compromising their investigations. But Michael S. Vigil, a former senior agency official who is currently working for a private contracting company called Mission Essential Personnel, said, “We tried to make sure there was always close supervision of these operations so that we were accomplishing our objectives, and agents weren’t laundering money for the sake of laundering money.”

Another former agency official, who asked not to be identified speaking publicly about delicate operations, said, “My rule was that if we are going to launder money, we better show results. Otherwise, the D.E.A. could wind up being the largest money launderer in the business, and that money results in violence and deaths.”

Those are precisely the kinds of concerns members of Congress have raised about a gun-smuggling operation known as Fast and Furious, in which agents of the Bureau of Alcohol, Tobacco, Firearms and Explosives allowed people suspected of being low-level smugglers to buy and transport guns across the border in the hope that they would lead to higher-level operatives working for Mexican cartels. After the agency lost track of hundreds of weapons, some later turned up in Mexico; two were found on the United States side of the border where an American Border Patrol agent had been shot to death.

Former D.E.A. officials rejected comparisons between letting guns and money walk away. Money, they said, poses far less of a threat to public safety. And unlike guns, it can lead more directly to the top ranks of criminal organizations.

“These are not the people whose faces are known on the street,” said Robert Mazur, a former D.E.A. agent and the author of a book about his years as an undercover agent inside the Medellín cartel in Colombia. “They are super-insulated. And the only way to get to them is to follow their money.”

Another former drug agency official offered this explanation for the laundering operations: “Building up the evidence to connect the cash to drugs, and connect the first cash pickup to a cartel’s command and control, is a very time consuming process. These people aren’t running a drugstore in downtown L.A. that we can go and lock the doors and place a seizure sticker on the window. These are sophisticated, international operations that practice very tight security. And as far as the Mexican cartels go, they operate in a corrupt country, from cities that the cops can’t even go into.”

The laundering operations that the United States conducts elsewhere — about 50 so-called Attorney General Exempt Operations are under way around the world — had been forbidden in Mexico after American customs agents conducted a cross-border sting without notifying Mexican authorities in 1998, which was how most American undercover work was conducted there up to that point.

But that changed in recent years after President Felipe Calderóndeclared war against the country’s drug cartels and enlisted the United States to play a leading role in fighting them because of concerns that his security forces had little experience and long histories of corruption.

The Reach of Mexico’s Drug Cartels

Today, in operations supervised by the Justice Department and orchestrated to get around sovereignty restrictions, the United States is running numerous undercover laundering investigations against Mexico’s most powerful cartels. One D.E.A. official said it was not unusual for American agents to pick up two or three loads of Mexican drug money each week. A second official said that as Mexican cartels extended their operations from Latin America to Africa, Europe and the Middle East, the reach of the operations had grown as well. When asked how much money had been laundered as a part of the operations, the official would only say, “A lot.”

“If you’re going to get into the business of laundering money,” the official added, “then you have to be able to launder money.”

Former counternarcotics officials, who also would speak only on the condition of anonymity about clandestine operations, offered a clearer glimpse of their scale and how they worked. In some cases, the officials said, Mexican agents, posing as smugglers and accompanied by American authorities, pick up traffickers’ cash in Mexico. American agents transport the cash on government flights to the United States, where it is deposited into traffickers’ accounts, and then wired to companies that provide goods and services to the cartel.

In other cases, D.E.A. agents, posing as launderers, pick up drug proceeds in the United States, deposit them in banks in this country and then wire them to the traffickers in Mexico.

The former officials said that the drug agency tried to seize as much money as it laundered — partly in the fees the operatives charged traffickers for their services and another part in carefully choreographed arrests at pickup points identified by their undercover operatives.

And the former officials said that federal law enforcement agencies had to seek Justice Department approval to launder amounts greater than $10 million in any single operation. But they said that the cap was treated more as a guideline than a rule, and that it had been waived on many occasions to attract the interest of high-value targets.

“They tell you they’re bringing you $250,000, and they bring you a million,” one former agent said of the traffickers. “What’s the agent supposed to do then, tell them no, he can’t do it? They’ll kill him.”

It is not clear whether such operations are worth the risks. So far there are few signs that following the money has disrupted the cartels’ operations, and little evidence that Mexican drug traffickers are feeling any serious financial pain. Last year, the D.E.A. seized about $1 billion in cash and drug assets, while Mexico seized an estimated $26 million in money laundering investigations, a tiny fraction of the estimated $18 billion to $39 billion in drug money that flows between the countries each year.

Mexico has tightened restrictions on large cash purchases and on bank deposits in dollars in the past five years. But a proposed overhaul of the Mexican attorney general’s office has stalled, its architects said, as have proposed laws that would crack down on money laundered through big corporations and retail chains.

“Mexico still thinks the best way to seize dirty money is to arrest a trafficker, then turn him upside down to see how much change falls out of his pockets,” said Sergio Ferragut, a professor at the Autonomous Technological Institute of Mexico and the author of a book on money laundering, which he said was “still a sensitive subject for Mexican authorities.”

Mr. Calderón boasts that his government’s efforts — deploying the military across the country — have fractured many of the country’s powerful cartels and led to the arrests of about two dozen high-level and midlevel traffickers.

But there has been no significant dip in the volume of drugs moving across the country. Reports of human rights violations by police officers and soldiers have soared. And drug-related violence has left more than 40,000 people dead since Mr. Calderón took office in December 2006.

The death toll is greater than in any period since Mexico’s revolution a century ago, and the policy of close cooperation with Washington may not survive.

“We need to concentrate all our efforts on combating violence and crime that affects people, instead of concentrating on the drug issue,” said a former foreign minister, Jorge G. Castañeda, at a conference hosted last month by the Cato Institute in Washington. “It makes absolutely no sense for us to put up 50,000 body bags to stop drugs from entering the United States.”

When someone is accused of a crime they are innocent until
proven guilty or are they?  If they CAN
afford to they will bond out of jail to get back to work and their family. They
will hire private council and have their day in court. How does one get a fair
shake if they can’t afford to get back to their job and hire great council?

Most
attorneys have lowered their prices simply because clients cannot afford
services needed. Some Defendants have remained in jail because they can’t afford
a Bail Bond. As an advocate for my clients I have come up with two solutions that will help clients
get out of jail quickly and back to their family and at an affordable cost.

When an
existing or new client calls an attorney, I understand that I may be the first
person that client meets while taking care of their bond. This will reflect on
the way the client feels or trust the attorney. I hold this in the highest
regard and do not stop until the job is complete. I offer confidential, caring
professional service to attorney clients.

Must have retained private council

Must pay in full at time of application/ posting

Must have approved Co-Signer

Must make all court dates and not violate Bond agreement/ application

Must have retained private council

Must make all court dates and not violate Bond agreement/ application

Bail Bonds for all of California. Wrongful conviction, delayed justice
Scroll to top